The so-called fast loans (i.e. loans for under BGN 400) have become especially relevant recently. On one hand, because of the discussion that arose from their regulation, and on the other hand – because of the ever increasing activity of companies which provide such loans. The examples of people loaning a very small amount after which they have to return it in triple, even quadruple size, have become frequent in the media. The acute public sensitivity creates even bigger expectations for the legislator to regulate the activity and conditions of lending fast loans. The legislative regulation will restrict the possibility for misuse. The inclusion of loans up to BGN 400 in the regulation of the Consumer Credit Act would contribute to the decrease in the unsound organizations in the sector.

What are the peculiarities of fast loans and why do the conditions in them create the impression of inequality between the parties?

A fast loan is practically a small pecuniary loan, lent without equitable charge and in very short periods. That is way the interest rate is higher – the consumer gets the loan almost immediately and in situations, in which no bank would approve them for a loan. So far, nothing unusual or unfair. Life sometimes forces us to urgently look for a small loan for covering an urgent or sudden need. To a large extent, the main users of this type of loan are financially disadvantaged without any savings, people without jobs, often without education. Oftentimes these people are poorly informed, they do not read the documents they sign, and they put their signatures on papers which they do not understand. This way the consent with extremely unfavourable conditions.

As an attorney, I cannot agree with the opinion that when you are poorly informed, you have to read and review more. When you do not understand something, you should not agree with it blindly. It is true that no one forces anybody to sign a contract. The defendants of the market economy are always against the additional interference of the state i.e. the supply and demand are the natural regulators and the state should not limit the interest rate. These arguments sound reasonable, but in a different context. Actually, the lack of sufficient regulation puts the consumers of fast loans on a steep debt spiral.

Why is a normatively established conservative framework of interest rates, fees and penalty interests for fast loans necessary?

Let us look at an example. Ivan works in a construction company. He often finishes his salary around the middle of the month and until the following month he tries to save money, he borrows money from friends “until pay day”. He saw a commercial on fast loans and decided to borrow BGN 350 with which to pay his lease and bills on time. He obliges to return the sum within 30 days – for the first 15 days the loan is interest-free, for the other 15 days the interest is double in size. On the due date he has to pay BGN 450. Nothing disturbing, Ivan is pleased with the deal. He needs the money and knows that no bank would lend him a bigger loan with his income.

The injustice occurs is Ivan cannot return the sum on the due date i.e. if he falls into delay. In this moment the penalty clauses in the fast loan contract are activated. The longer the delay, the larger the final amount gets. Interest and penalty interests, fees for the loan management, etc. are added to that sum. The due amount quickly turns out to be several times higher and continues to constantly bear interest until the final debt repayment.

Ivan’s salary is delayed and he cannot return the loan in due time. He estimates that he now owes BGN 1 500. If he does not pay immediately, after a week the loan will increase to BGN 2 000. After some delay, the creditor undertakes legal actions to collect the due amount – most frequently via arbitration where the proceedings are quick and of one instance. Afterwards, the company initiates enforcement proceedings with a bailiff. The expenses for the court and enforcement proceedings are also on behalf of the debtor. Ivan receives an invitation for voluntary execution for more than BGN 5 000. If he does not pay within 14 days, the bailiff may proceed to a property inventory.

This example may seem exaggerated, but it is quire real. So far the creditor has not committed any violation of the rights of the consumer-debtor. This is how form a fast loan for BGN 350, it turns out that Ivan owes a four-digit sum and is faced with the threat of having his property being put up for public sale.

Where does the state have to intervene?

We can conclude from the example above that the consumers willingly put themselves in the position to owe a couple of thousand BGN. It can be easily supposed that if one consumer has asked for such a loan, they are probably in a difficult financial situation and that for them there is a real risk of not being able to repay the loan back. However, disproportionate financial sanctions, which would worsen their financial situation, should not be allowed against this delay.

This is where the role of the legislator as a regulator lies. The big problem is not the high interest on the loan – the consumers are relatively well informed about it when signing the contract. The more serious matter regards the aggravations in case of delay. The state has to normatively fixate precise admissible by the law lines with which the companies for fast loans have to comply regarding their interest rates, fees for management, penalty interests, etc. Exactly these parameters are out of control, advantageously guarded by the principle of freedom to contract. The role of the institutions is a question of guaranteeing the principles of justice and fairness and much less a matter of an attempt to intervene in the free market. We should keep in mind that every contract which violates the good morals within the meaning designated by the Obligations and Contracts Act is invalid. Clauses in the fast loan contract, which are extremely unfavourable for consumers, can also lead to its invalidity. A question arouses whether the Bulgarian court (including the arbitration) has to grant the claims of fast loan companies against their clients when the contracts between them contain clauses for fees, interest rates and penalties that are in a size, contradicting to the principle of justice and fairness.

The large amount of companies offering fast loans is a response to the increasing demand on the market. Such organizations should not be demonized whatsoever and should not be put under a common negative denominator. The role of the state is to normatively restrict the possibility of companies gaining profits at the expense of financially troubled debtors. 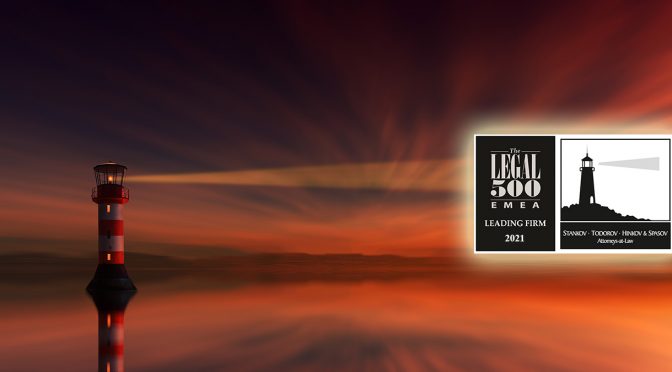 The prestigious ranking is part of a well-established tradition of more than three decades which covers law firms and legal professionals across more than 150 jurisdictions worldwide. END_OF_DOCUMENT_TOKEN_TO_BE_REPLACED

Obstructing the right of the parent without parental rights to have personal contact with their child is illegal. END_OF_DOCUMENT_TOKEN_TO_BE_REPLACED

We are happy to welcome Nina Triondzhieva, Attorney-at-law, in our team. END_OF_DOCUMENT_TOKEN_TO_BE_REPLACED

Stankov, Todorov, Hinkov & Spasov, Attorneys-at-Law has been ranked among the leading law firms in Bulgaria by the Legal 500. END_OF_DOCUMENT_TOKEN_TO_BE_REPLACED